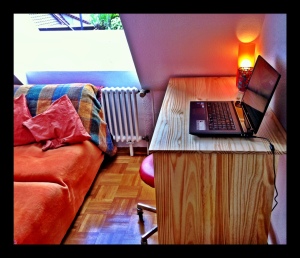 Apologies for the overly HDR-ed picture, but… tadaaaa! I’ve been muttering for some time about converting an area of the landing into an extra workspace, and now it’s done (well, apart from a bit more accessorizing, that is).

I’ve had the sofa there for some time and really, really didn’t want to have to move it significantly or – heaven forbid – get rid of it from that corner, as it’s a wonderful place to read in full daylight. But the way it was arranged meant I was always sat opposite a blank white wall when I was there, and that wasn’t all that inspiring. Now that I’ve rearranged its constituent elements, including the main cushions to lean against, I can stretch out at either end and either look out of the window or have daylight coming from behind, which is fantastic if I’m working on correcting a load of things by hand, or simply reading. I’m convinced it’s the best window in the flat for light, as it’s more or less north-facing and you only get the feeling of a few direct rays shining in at sunrise – the rest of the time it’s very “easy” light, plus the area seems to stay cooler than the southern side of the flat in summer (hence my original office space downstairs not being such a great place to work when it’s hot).

The desk is very simple indeed, but I was very much guided and restricted by what would fit in the space: there is a cupboard door just off the right hand side of the picture which certainly meant the desk couldn’t be too long. However, I definitely wanted as much surface area as possible, as I’m often simultaneously using my laptop as well as several piles of papers and/or a couple of open books for a lot of the things I do. It also definitely had to be real wood rather than some plastic or MDF monstrosity, and it was essential that it provided some storage for stationery and a few craft supplies. In fact, this desk has four drawers down the left hand side, which is great as the slope of the ceiling means you can’t sit at that end anyway.

I only ordered the desk last Wednesday evening, so I was amazed when it arrived on Friday morning as the estimated delivery date wasn’t until at least the 29th, and I hadn’t got around to tracking it online. What a bonus, I thought, and set about putting it together late Friday afternoon. This was a bit of a challenge given that although the box contained (as it turned out) all the necessary pieces of wood, runners for the drawers and pull-out keyboard surface, plus a heavy bag of bits of dowelling, screws and other metal fasteners I wouldn’t know the name of, it had NO INSTRUCTIONS!! In the end, though, the only thing I didn’t realize before tackling it is was that the fronts of the drawers needed to have their dowelling pegs glued in. This became apparent only when pulling one of them open resulted in the front coming off in my hands, but at least I was able to put my hands on the wood glue within a matter of minutes and this minor setback was fairly quickly forgotten (except for the glue I got in my hair, but never mind – true craftsmanship leaves its mark ;-)).

I didn’t want a vast desk chair because, although it might be comfortable, it would again take up too much space. I have a lovely old dressing table stool that belonged to my grandmother which I want to restore – it’s just a question of redoing the webbing that supports the removable cushion, so an easy DIY task. For the moment, though, I have discovered that it was possible to unscrew the back from a funny old red chair on wheels I had, and that’s turned out to be the perfect height and pretty comfortable, too.  It fits tidily under the desk when not in use. Maybe I’ll find a different place in the flat for Grandma’s dressing table stool at a later date.

So far I’ve got as far as putting up a couple of pictures to get away from that blank wall feeling – Paul Klee’s Revolution des Viaductes, and a modern photo-on-canvas picture of some glass bottles in just the same shades I have elsewhere in this alcove – lots of orange, green, blue, pink. Other than that, I’ll probably bring up a plant from downstairs and maybe a simple ornament or two, but the plan is to keep it simple and uncluttered (famous last words, I know…).

And it’s here that I sit typing this blog post. The window is wide open and I can smell the herbs outside on the roof terrace. I was going to say that there is barely a sound to be heard as the window looks out onto the rooftops above an enclosed courtyard that is not a thoroughfare. However, the cathedral (located 200m from here) has just started up its Whitsun evensong bells. Hey ho! But I wouldn’t be without them for the world…

What was the best thing you learned about yourself this past year? And how will you apply that lesson going forward?

END_OF_DOCUMENT_TOKEN_TO_BE_REPLACED

Filed under Memes & blogging challenges, Up close and personal

Many of us have mild, relatively harmless forms of compulsive behaviour. Mine tend to manifest themselves in the context of colour, shape and / or geometry, very visual things. Maybe photography is a suitable outlet in that case.

At university I went through a phase that lasted up to a year or so when I always wore socks that were the same colour as the T-shirt or other top I was wearing. Or if you’ve ever been to the pub with me, you might have noticed me fiddling with my glass to get it absolutely centred on the beermat.

My latest tic is putting my washing on the airer in rainbow order of colour. I am pleased (and anxious) to add that this is not something I waste time on if I don’t have time to spare, but it’s very pleasing to the eye when it does work out. Today – don’t laugh – it looked downright gorgeous, so I took some pictures to show the world how artistic laundry can be. I also took inspiration from a shot that Peter posted on Flickr recently.

Note: Obsessive-compulsive disorder is a serious condition that can make people’s lives utterly miserable – whether the sufferers themselves or those around them. Nothing in this post is intended to make light of that condition – I’m sure most of us know someone whose life is negatively affected by it.

Filed under Up close and personal

* I am thinking of this or this, not this.

Hands up who remembers the 80s, when so-called jewel colours were all the rage and teenage would-be fashion victims (viz.: me) would clad themselves from top to toe in said hues, sometimes wisely tempered with a liberal element of black or white, though more than occasionally resulting in wardrobe malfunction, judging by the photos.

Magenta, jade green, royal blue, mustard, purple – these are the kind of colours we mixed, matched and accessorized. Jade green and royal blue I wasn’t keen on and was pleased to see the back of; likewise mustard, which makes my skin look sallow or jaundiced. Magenta was alright, it satisfying a fondness for pink that has never gone away, but it was purple that remained the colour of choice for me.

The colour purple, rich, regal and exotic. I was fascinated by the existence of the Land of Purple with its tiny molluscs; this was the colour that Nero decreed was to be worn by the Emperor alone, with Henry VIII enacting a similar kind of dress code later in history. You can trace important developments in social, economic and art history through purple-tinted glasses…

I spent a lot of the 90s wearing purple: it combined well with the slightly Gothic-inspired look I favoured and with my penchant for things Victorian, medieval and Celtic. I had scarves, pullovers, jeans, socks, dresses, tights, underwear, nail varnish, jewellery, Doc Martens in varying shades of it. I even made purple silk roses to decorate a hat which I wore to a wedding (together with a purple dress, shoes and handbag, of course).

Anyway, to cut this long excursus short, I must have reached saturation point eventually, and I’ve been wearing less and less purple the last few years. The old garments have worn out, don’t fit any more or are passé in style, and I obviously haven’t found new ones that appeal.

But the odd thing, and the direction this pre(r)amble (purple prose?) has been heading in, is this: purple, it seems, is de rigeur for Spring 2009, and the shops are chock-full of it; but it leaves me totally cold.

I feel all purpled out – I have only to look at one of these garments and I immediately feel uncomfortable. Why? It can’t be just that my hair is now more brown than black and thus a bit more likely to clash, and it certainly isn’t the case that my skintone has changed significantly. Nor do I honestly believe that I am being subliminally affected by the poem that begins with the line “When I am an old woman, I shall wear purple”.

Has anyone else found that their taste in colours has changed in a weird way like this, and do you have an explanation?

Filed under Up close and personal