Random interlinguistic thoughts for the week

I don’t seem to have a concrete topic to write about this week, but I have been saving some snippets of thoughts about language, especially connections or contrasts between languages, that have occurred to me while in the shower, through overheard conversations or just in the course of everyday activities.

1. There’s a hole in my bucket

One of this week’s mundane but important tasks was to repot several large plants and trees that seem to have accumulated in the flat. We needed to make some drainage holes in the bottom of a galvanized metal pot, and M set to work at this, humming away (as you do). And it was at that point that I had what Germans call – and I love this term – an Aha-Erlebnis (“aha experience”), as I realized he was humming the tune to “There’s a hole in my bucket”, which I remember very clearly from childhood. Except, of course, that the muttered fragments of text that were audible were German.

It turns out that the song is in fact in all likelihood of German origin, the earliest known version being attested from around 1700 – I really hadn’t imagined it was that old. It later became known as “Heinrich und Liese” (Henry and Liza in the English version, of course) and was widely believed to be a folk song from Hesse. Interestingly, it may have entered English through Pennsylvania Dutch, as versions were collected in some mid-20th century collections of Pennsylvania Dutch folk songs.

It wasn’t until about 1960 that the English version became popular – notably through Harry Belafonte’s recording of it with Odetta, which reached no. 32 in the UK singles chart in 1961. Oddly enough, while I hadn’t imagined the song’s history to go back as far as 1700, I was also surprised at how recent an addition it is to the English-language repertoire of nursery rhymes and so on.

No, I’m not going to regale you with the story behind another childhood song here (“Daisy, Daisy, give me your answer do…”) – this time it’s the word itself that interests me. Or more specifically, the name of this flower in different languages.

The English name is, I guess, pretty “meaningless” (in the sense of not having an obvious, substantial semantic component) to the casual observer – it has a feminine quality, not just because of its association with a flower but because it doubles as a girl’s name. It was only when I learned the Welsh name for it that I had another of those Aha-Erlebnisse – it’s widely known as llygad y dydd, which translates literally as “eye of the day” (which is, incidentally, the exact English term Chaucer used for it), shortened to “day’s eye” and hence the cognate of the English name.

The other languages whose words I know for the same flower have rather different names for it. In standard German it’s a Gänseblümchen (literally: little goose flower), this name coming, apparently, from the fact that it tends to be found in areas where the grass is short, and in olden times such suitable habitats would often have had their grass kept short by e.g. geese grazing on it.

The French word for the larger ox-eye daisy, marguerite, has something in common with the English word “daisy” in that it doubles as a girl’s name. What I didn’t know until very recently, though, was that the English girl’s name Daisy was, in former times, most frequently a nickname for a girl called Margaret. Ordinary daisies, it seems, are called pâquerettes in French, in connection with the fact that they tend to make their appearance around the time of Easter (Pâques).

German is full of anglicisms these days, especially in areas such as advertising, fashion, telecommunications and marketing. I’m sure you can work out why some people in these areas might find it cool, impressive or whatever to pepper their sentences (if they manage sentences, that is) with this foreign jargon. Other people’s sensitivities can flare up, though, when more everyday language becomes noticeably affected.

I used to try to avoid unnecessary anglicisms when speaking in German, but at some point you realize you’re fighting a losing battle if you try to avoid them altogether, and I’m not keen to sound stilted, old-fashioned, snobbish or foreign for avoiding these words. Plus languages have always borrowed from one another; it’s an inevitable element of language change.

However, I continue to find some of the English words that have been adopted into German to be really rather awkward, even embarrassing to use, especially the verbs that you can conjugate as if they were German verbs. One example that I heard used numerous times on a talk show at the weekend was the verb outsourcen, especially the past participle outgesourced. Now that’s just yucky. As it happened, the host and about half the guests on the programme seemed rather uncomfortable using it, too, so I did find myself wondering why they bothered.

The incredible dryness of cold 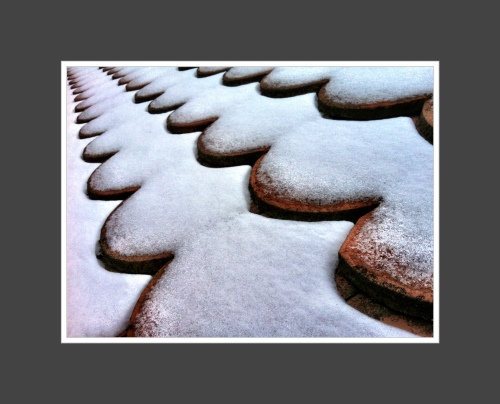 I’m not about to express surprise at the fact that it’s cold in winter. By the standards of a LOT of people I can think of, the temperatures we’re facing this week – an average of about -7°C during the day – are temperate, mild, even balmy by comparison with quite extensive other parts of the world.

But what never ceases to amaze me in Southern Germany is just how dry cold can be. Having spent my formative years in the insular climate of lowland areas of the UK, especially on the coast, I’m used to cold being accompanied by wet. I expect a daytime thaw even when there’s snow on the ground, and so the fact of the snow just staying the same for days on end, simply because it remains frozen and can’t go anywhere or change its consistency, is quite weird. It strikes me as eerily Groundhog-Day-like, so maybe it’s appropriate that I’m writing this post today of all days!

What’s struck me particularly today is that even though there is absolutely no snow or visible patches of ice on the streets here in the middle of the city (the picture above is of the North-facing roof of the house), the street surfaces nevertheless have an odd look to them, a pale, dusty, almost mildewed-looking grey. It’s like a thin salt crust or sprinkling of talcum, very dull and matte, and not in the least slippery. I’m guessing the tiny moisture droplets in the air are simply freezing on contact with the frozen ground and causing this strange effect. It’s definitely not salt as it darkens and then disappears if you warm it.

It’s odd how little details of a place’s climate can astonish you even after many years of living there, but at the same time it’s pleasing to be able to marvel at something that must strike many other people as ordinary or insignificant.

Postscript: Following on from a discussion of this with Rolf on Twitter, I have now been reminded that this phenomenon is called deposition or desublimation – in this case the direct transformation of water vapour (i.e. gas, not droplets) into ice in sub-freezing conditions. Thanks Rolf!

Filed under Intercultural & interlinguistic, Out & about

From the pens of students

Students are full of lovely surprises with their interpretations of British culture. Here is a compilation of some of the choicest recent offerings (obviously without attribution, and condensed in a few places).

On British opposition to the idea of a channel tunnel:

“It would be an opportunity for ‘strange creatures’ to enter Britain.”

“The Labour Party is not particularly Communist-orientated these days.”

“The Tories get their votes from people who have an interest in the consistency of the actual order of things.”

On the changing profile of the Welsh language:

“Until the 1960s Welsh was only spoken by older people because it had been forbidden to speak.”

On Cornish pasties (as a possible early form of crossover cuisine?):

“[…] the calzone-like wraps that were eaten in the North by the miners”.

On the red rose as the symbol of Labour:

“Be careful: roses have crumbs and can hurt you (make sure you wear thick gloves if you are fuzzy).”

I do love this job…